This is my last roll with the Rolleiflex Automat I have been playing with for the past five months. Fear not I am going without medium format only until Christmas when I will get a Rolleiflex Series E with the 80 f2.8 Zeiss Planar lens from my mom and brother (he will be happy to get his Rollei back). I shot the below last weekend with Kodak Tri-x 400 processed in Xtol 1+1 in the Beaches neighbourhood in Toronto. I was blessed with a clear sunny day without too much windchill, offshore breezes can be bitter off Lake Ontario. Update: Just a quick note on the images, I have found Blogger crops the image a little bit, this is not intentional on my part. Please click on the image to get the original.
Post a Comment
Read more
December 01, 2009 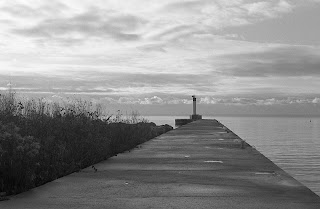 I used to shoot with a Canon AE-1 from 2001 to 2005 as my entry into what I term manual focus photography. I switched to Nikon when I received a Nikon F as part of my dad's estate, picked up a Nikkormat Ftn and a second F the same year, so the AE-1 had to go. Turns out you can go home again, I was gifted a 38 year old Canon FTb along with a later production FD 50 f 1.8 lens and a mid production FD135 f 3.5 telephoto lens a month ago. After a test roll, I am reminded how nice Canon FD glass is and it's a pity the mount is an orphan. Don't think for second I am liquidating my Nikon kit but I am going to keep my eye out for more Canon FD lenses. I am really happy my new to me FTb's shutter speeds are pretty much bang on. Now all I have to search for is a Wein Zinc Air 625 battery as mercury cells have been illegal for some time. The below test shots were taken around the Oakville waterfront yesterday with Kodak Tri-x and processed in Xtol 1+1. Thank you Elizabeth Re
Post a Comment
Read more
November 27, 2009 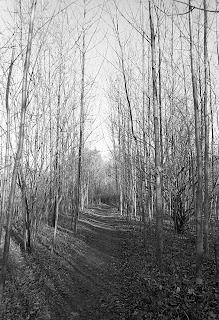 A tale of two Wideangle lenses Nikon in the 1960s and 1970s made some really 28mm wideangle lenses. Here is a back to back comparison between the fast Nikkor N 28 f2 lens and the classic Nikkor H 28 f3.5 while slower has very high performance in it's own right. I borrowed my brother's Nikkor N 28 f2 lens a few months ago to play with, it was made for photojournalists working in less than ideal light. So does it stack up with my beloved Nikkor H 28 f3.5? I don't know, going through my Flickr account and doing a comparison, I prefer my slower 28. This is just comparing negative scans, the real test will be printing from the negatives. Now if you want to read up more on the subject, check out Photography in Malaysia's pages on the Nikkor 28mm lenses . I do not hold myself responsible if after reading you get a case of Gear Acquisition Syndrome (GAS). Top two were taken with the Nikkor N 28 f2 lens up at Limehouse Conservation Area and the bottom photos two Nikkor H
Post a Comment
Read more
November 14, 2009 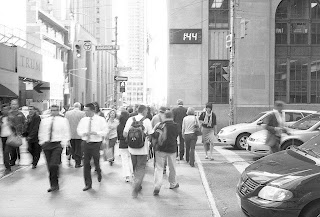 The Magic Image This is not a perfect image, it's not totally razor sharp but I love it. I wanted to give the impression you are on Bay St. downtown Toronto in the middle of the crowd and I nailed it. I used my last roll of Efke 50 in my Leica M3, the perfect film/camera combo. I can hand hold at slow shutter speeds and I get a really cool vintage look because the manufacturing process with Efke films has not changed in 50 years.
Post a Comment
Read more
November 08, 2009

We all love some fall colour. Shot a few weeks ago up on the way to and at Forks of the Credit Provincial Park. I used my Olympus OM-1 MD with Kodak Elite 200 slide film, the black and white set will follow later in another posting.
2 comments
Read more
October 27, 2009 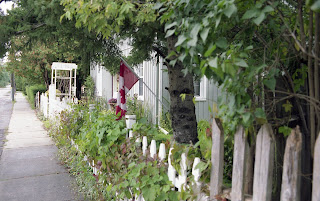 One of the bonuses of babysitting my brother's camera equipment while he and his family moves house is I get to play with some really cool toys. In this case a Leicaflex Sl, Leitz's answer to the Japanese SLR juggernaut in the 1960's, alas for them, loo little, too late. That being said Leica SLR lenses are really nice glass and it's a shame they never made them in third party mount for example Nikon F, Pentax K mount, etc. In this particular set, I went out on a damp Sunday morning with a black Leicaflex SL and got a chance to put a 21 F4 Super Angulon through it's paces along with the 35 f2 R Summicron that I used as the prime lens on the camera. The film used was Fuji Pro 160 S rated at 100 ISO.
Post a Comment
Read more
September 30, 2009

This is something I don't to anywhere near as often as I should, shoot people and portraits. I have to step out of my comfort zone once in a while. Not that I am bad shooting people, it's a different dynamic the capturing a landscape or a street scene. The top two are of Hayley and Kieley respectively, taken with a Rolleiflex Automat with a 75 f3.5 Schneider Xenar lens with Ilford Delta 400 film at the OCC AGM a month ago. The bottom headshot is of my friend Derik shot on a Nikon F3 Press Camera with a Nikkor Ai 200 f4 wide open with Kodak Tri-x 400.
Post a Comment
Read more
August 29, 2009 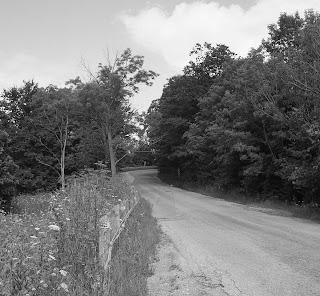 I am so doomed with medium format, my only saving grace is not falling in love with the Hasselblad 500 CM 6x6 SLR system. I am devoted to Rolleiflex in terms of weight and ergonomics after trying out Alex's Mamiya C220F. It's a heavy twin lens reflex camera with interchangeable lenses which is nice if you need to switch between wide, prime and telephoto. Personally I find the Mamiya too heavy, I prefer hand old shooting over tripod work and Rollei just plain works for me. Now while I only have negative scans here, I did print from 6x6 negatives last night. It takes some getting used to in terms of exposure but the end results done right blow my mind. Thank you Alex for loaning me your Nikkor 80 f5.6 EL lens, it will be put to good use the next few months.
1 comment
Read more
August 23, 2009 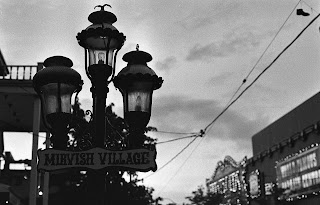 Kodak Tri-x 400 is one of those legacy black and white films that can be used for most photographic situations. What I like about it is you can push (deliberately underexpose) up to 3200 ISO and get a decent negative with stand development with Rodinal Developer . The images below were shot on a Nikon FE2 I re-sealed for my brother and I wanted to test it out. The roll of Tri-x was exposed at 3200 and processed in 1:100 Rodinal so if I was mixing up a 500ml solution it would have 5ml of Rodinal concentrate. I stand developed for two hours starting off with 30 seconds of gentle agitation and after that three gentle agitations every half hour. The solution temperature was at 20c, give or take a degree. The biggest mistake people do when using this combination is over agitating the tank full of developer or being too aggressive with the agitation. That will introduce a lot of grain which most times you don't want. This is my go to combination for doing event photography for my I
Post a Comment
Read more
August 04, 2009

I am spending a lot of time up near the Forks of the Credit this Summer on weekends working on a project for possible exhibit next year with two other photographers. We are focusing on the GTA Greenbelt a region around Greater Toronto though protected officially from development is under stress from gravel quarries and expanding suburbs. I am focusing on the fragile beauty of the Greenbelt and I am having fun putting the portfolio together. I will be spending the winter in the darkroom printing the 35mm black and white, over at my brother's for the 6x6 negatives and I have to find a decent colour lab who can handle the slides and c-41 negatives regardless of format.
2 comments
Read more
August 02, 2009

My brother Alex is my worst enabler. I now want a Rolleiflex after trying out his Rolleicord recently on a hike near Belfountain. For those not familiar, Twin Lens Reflex cameras have been around for about 80 years and use 120 roll film. The Rolleicord is the prosumer TLR derived from it's "big brother" the Rolleiflex and differs a little on features and ergonomics. So why beat around the bush, get the rolleiflex and be done with it. As much as people merit the versatility of a Hasseldlad 500 series 6x6 SLR system, personally I rather have the TLR. You only get one choice of lens on the camera as it is built in, mechanically it's really simple and it does not weigh a ton. What I love about medium format photography is you have to slow down, plan your exposures a lot more than 35mm and be really fussy with your metering of the scene. I used Ilford Delta 400 black and white film processed in Xtol 1+1. Not my usual choice of film, it's all Henrys Oakville had i
1 comment
Read more
July 15, 2009

Fun with Kodak Ektar 100 I am currently experimenting with Kodak Ektar 100 C-41 film. With Kodachrome 64 discontinued and E-6 slide processing getting difficult to find, having this new film from Big Yellow Father is a gift, most of the time. This film stumps me with blue skies. Ektar 100 is well as its name states, is available in 100 ISO only in 135 and 120mm format, it’s relatively cheap ($ 4.95 a roll at Film Plus ) and is the finest grained colour negative (C-41) film on the market. I picked up six rolls to conduct tests to see what I can get running the film through my gear. The first roll went through my Leica M3 with the shots being incident metered with Gossen Profsix Light meter. Great outcome from that session which can be found with my Webster’s Falls outing in late April. The most recent roll was exposed in my Olympus OM-2n a compact 35mm SLR with aperture priority ability and “off the film” metering, I have never taken a bad shot with this camera. All my lenses hav
2 comments
Read more
July 03, 2009

My Leica M3 is seeing more action these days. I recently tracked down the proper lens hood for my Canon 50 f1.4 LTM lens and it is on the camera all the time instead of the 50 f2 Collapsible Summicron. I shot the three images below with some Kodak Tmax 100 processed in Xtol 1+1 and I can't wait to print from the negatives.
2 comments
Read more
June 10, 2009

I got a chance to try out some slide film gifted to me. A fellow member of the Oakville Camera Club gave me her remaining slide film stock as she switched to digital. Thankfully it was stored properly in the freezer and I am quite happy at how this set turned out. I used my Nikon FE with this hiking photo shoot along the Bruce Trail in Ancaster Ontario and shot Fuji Provia 100.
2 comments
Read more
More posts